The big day was here, Christmas, New Years and the first half of the season is already over, now it gets to the business end. This had been the game that every football fan has been looking forward to since the reverse fixture! It was not a title defining game, but it could have put either Liverpool far and away of City, or brought City well and truly roaring back into the title race. They’re not out of it, but being 10 points behind after a home loss here would have been a huge gap to close.

How can a first half have so much quality, intensity and excitement in it, yet only have had 4 shots and only half of those on target?! It’s clear when you watch it why these are two of the three horses in the race for the title this season, the skill they both have are of immeasurable danger to any opponent. The tactics from both managers seemed to focus largely on playing out from the back when in possession, whilst pressing high whilst not, never letting the opponent get comfortable on the ball, which lead to some fast paced, dangerous play from both sides.

For the first ten minutes, Liverpool seemed to invite City pressure onto them, sort of to say “Show us what you can do then!” whilst knowing that they didn’t need a win here, a draw would have sufficed to keep that seven point gap. City then dominated the opening exchanges, before, out of nowhere, Liverpool got the ball with Salah coming a little deeper to collect it, then he played a lightning quick exchange with Firminho before playing it through to Mane, who could only get it onto the post. This was what I was talking about earlier with the dangerous play, Liverpool up to that point hadn’t posed any real threat, when all of a sudden one sumptuous piece of passing almost put them ahead. The follow up showed just how much they rattled City, when John Stones tried to clear it, only for Ederson to then try and save the clearance, leaving Stones to clear it literally 1.12 centimetres before it crossed the line!

"I tried to give it everything to clear it – I've heard it's quite tight!" – John Stones#MCILIV pic.twitter.com/xohzXF5KoT

After that, City did damn well to get refocused and get their heads back on the game, with deadly effect. It was that little man again, who never seems to be aging, who never seems to get worse with injuries, who can bang them in from anywhere! Of course, I’m talking about Fabian Delph…..I joke of course, it was Aguero, who is normally the man I dislike the most, being that he stole one of our Premier League titles with THAT goal. In this case however, for the first time in my life I think, I celebrated a Manchester City goal, excuse me while I go and shower. Although Van Dijk was at his infallible best, he’s unfortunate to have Dejan Lovren as a partner who, although looked incredible at the World Cup, cannot hold a candle to Virgil. Aguero showed great instinct to get across the front of Dejan and hammered it past the helpless Allison, not even Karius would have got a hand to that! The first half then had the two teams going at each other without making any real significant breakthroughs.

The second half began without so much of a bang, with City again having heavy possession but not really giving Liverpool a hard time, with their opponents not really being able to string several passes together. Then, on 62 minutes, Liverpool turned it on, first with a free kick into the box, leading to a miscommunication between keeper and Kompany which seemed to leave Firminho pretty much through before the defence recovered well on the line. Then, another ball over the top from Alexander Arnold, who also played the free kick, was missed by LaPorte’s head so Robertson could square to Firminho for an easy tap in header, resulting in Klopp seemingly murdering a helpless water bottle, not so much a la Mourinho but still! 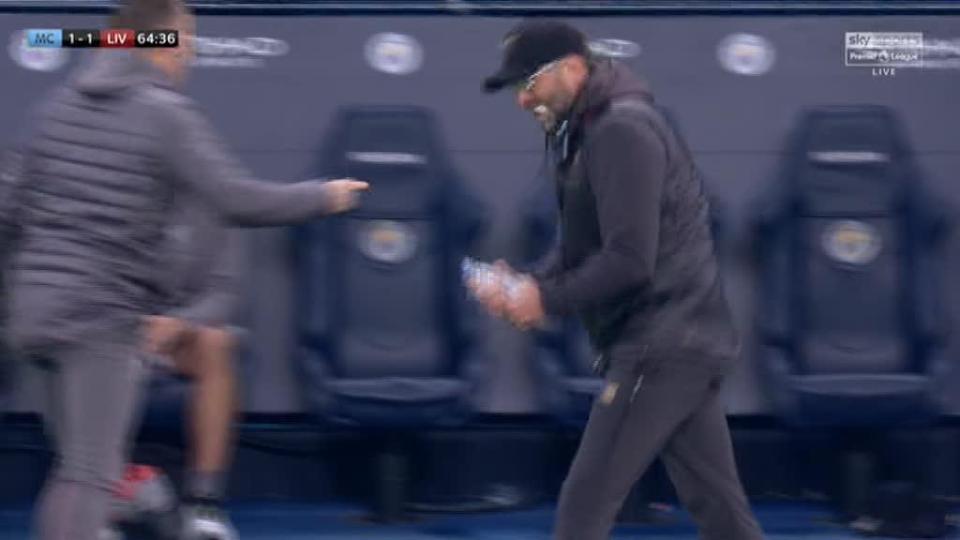 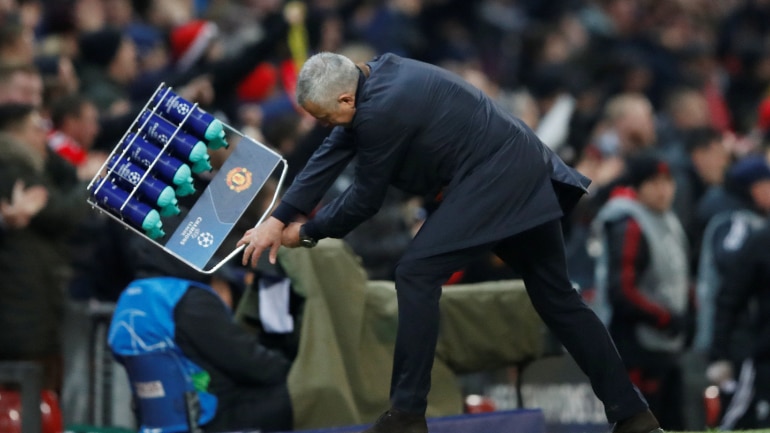 That, though, only seemed to awaken the City beast and they got right back on it, Sterling coming alive wonderfully and showed a cool head to slot Sane in behind, who finished with a peach off the post. Honestly, Sane up until this point had worked really hard for the team, making a lot of runs in behind, but was in danger of having a disappointing evening where he had fluffed several of his lines. Nobody is going to remember that though and this was really when the game burst into life.

Firstly, after some more Liverpool pressure, Sterling broke out from the defence. 5 minutes earlier he had tried to beat Robinson in the Liverpool area and the Scot was having none of it! This time, however, Raheem showed an incredible burst of pace to leave him in his dust and then absolutely perfect timing to play Aguero in again. He seemed to have beaten the keeper, only for Allison to stay on his feet and make a great save, showing why he was the worlds most expensive keeper for a couple of weeks. It was a very untypical miss for Aguero, who normally would’ve slotted it away, had someone else been the one in front of him.

Then, it was Liverpool’s chance to give City (and myself) the willies, Salah receiving a pass from Robertson and running around Stones, only for Ederson now to get literally his fingertips to the ball to put it wide. It is obvious that, although Spain may have De Gea, England may have Pickford, but Brazil have these two incredible shot stoppers, I do feel for the manager that has to pick between these two. In the build up, there looked to be a foul from Firminho on Fernandinho, which lead to Robertson’s through ball. It wasn’t blown up by the ref, but it was enough for the normally calm and collected Pep to take out his frustrations on his trusty hat, honestly inanimate objects do get it hard in football these days. What this did show, however, is just how much winning this game meant to Mr. Guardiola, with the gap now only at 4 points, Liverpool must be feeling a lot more pressure than they would have, had they put City 10 points behind.

Following this, there was even still time for Bernardo Silva to hit straight at the keeper, only for it to bounce to Sterling who blasted wide. One thing I must say here is how well Sterling played, when City were in the lead towards the end, he showed some great defensive play to make several interceptions and relieve some pressure on his own back line, he really impressed me with his energy and running during this game. He was probably an even better defender on the night than Dejan was, which is a real compliment considering Sterling is a winger.

One thing City did well was to not give away too many corners, I heard from my German commentators during the game that Liverpool have scored 14 goals from this certain situation this season, so to restrict them to the solitary one means they put in some quality defending. This was especially evident during the dying minutes, it was five added on but it must have seemed like 20 to those City players out on the pitch, chiefly when they don’t have a roar of fans behind them in the car park of a stadium they play in. The only time it was evident that any City fans were there was when the final whistle blew and there was a cheer, it almost frightened me out of my skin! In fairness, the stadium could’ve been full of any other fans who would’ve been happy to see Liverpool lose, hell it could’ve been an Arsenal crowd, probably the only fans rich enough to buy tickets to the Emptihad these days. All I know is, Dejan was wrong, the Invincibles II is not going to be achieved this year and it was mainly his fault why it didn’t happen, what a night!